In the morning of 12 November 2010, a Manufacturing Engineering delegation of 7 peoples headed by Mr. Khalis S. Taraman, President of Society for Manufacturing Engineers Education Foundation visited SIT through the facilitation of American “People to People” organization. International Cooperation Division met with the delegation.

The delegation members include the representatives from the local enterprises, companies, educational institutions, professionals, specialilists and professors. The group had the discussions with the faculties from our schools of Material Scinece and Engineering, Economics and Management, Electrical and Electronic Engineering,and Mechanical Engineering on the topics that of the common interests to both parties.

People to People Ambassador Program is under People to People International which itself is an American NGO that was founded by President Dwight D. Eisenhower in 1956 for the purpose of promotion of the understandings between the nations across the world. US ex-presidents, including current President Obama served as its Honorable Chairman. (Gao Jun) 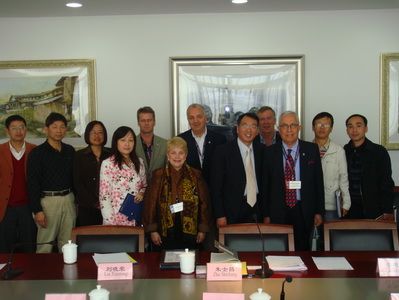